Great few days although busy! Hunting around Cuxhaven for a deck light bulb, a spark plug and a Standing Mast Route guide.. then setting off at 0600 hrs in 2 hrs of foul tide to try to punch West as far as possible

St B went like a lively steam train doing 6 - 8 knots SOG depending upon tide. That meant I could stretch to the Robingaat and do a night entry into an unfamiliar channel and Port - at Neaps Low tide. Head down at a little after 0100hrs rather tired after tying up on the waiting pontoon till 0700 for the lock into the inland waterways..

The day started fun and new for all.. tiny little waterways with seemingly no depth and increasing wind whipping round the canal corners and unsettling St B. The advice I got from the 4 'more seasoned' Skippers in Cuxhaven paid off. There IS enough water. The meers and gats (lakes and gates) get choppy but it's all level.

The other pieces of advice has also come true:

1. The bridges become a pain

2. It's both best and worst to team up with other yachts on the route.

3. Some bridges charge by holding out a clog attached to a fishing rod you drop a few Euros in! 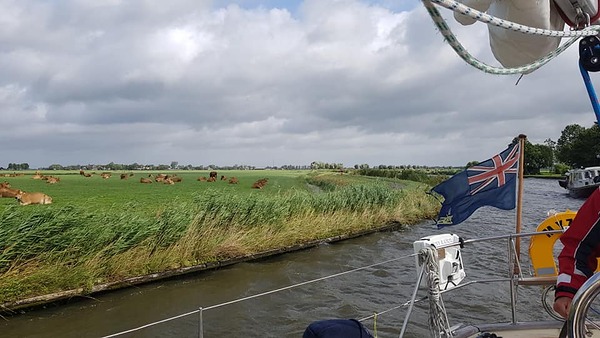 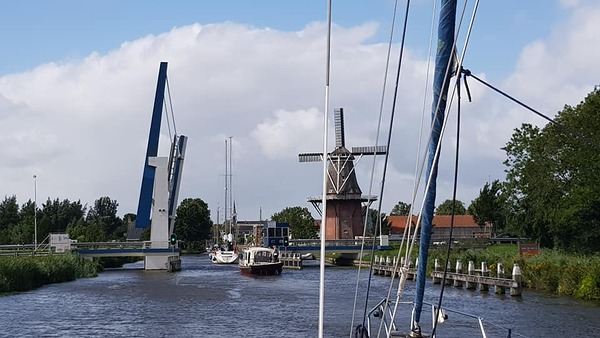 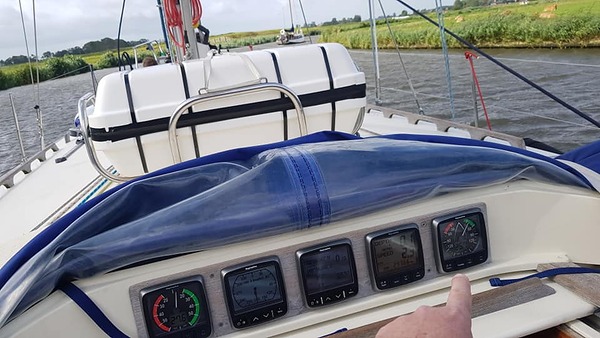 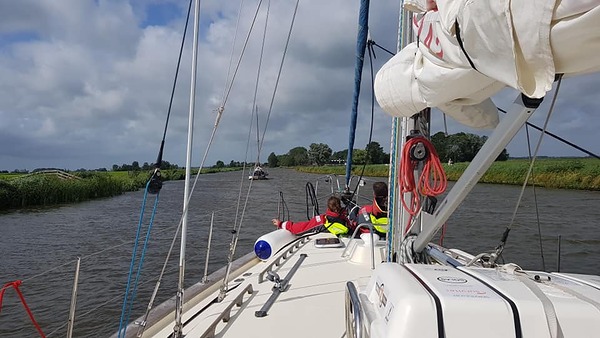 So were stuck, but luckily theres a restaurant opposite and that's where we are discussing the plans for our continued return. This weather system has really messed with my plan.. hopefully I'll be able to at least make UK shores...

Intent. Reveille 2 hrs before high tide to set of in company with 4 other UK yachts for Fresian/Mainland boltholes. Then looking to enter Dutch canal system to continue movement during poor weather.

Kiel canal passed with no incident save for Mac failing to get the outboard to run - it's become a bit of a thing. Today he's drained the diesel from the green petrol can and replaced the fuel in the outboard. Serviced the plug (again) and changed the oil. It fires now but fails to run.. oh for a Halfords to get a new spark plug which WILL sort it out.

Today was a wash out. We got up and resupplied for 4 days ahead of a passage towards Amsterdam/Den Helder. Weather seemed favourable right up till the point that it wasn't.. Elbe VTS began reporting strong wind warnings but I thought we'd go have a look anyway.. got as far as Green buoy 27 and came back as the VTS reported F8 in gusts expected and the darkest of skies began to track towards. Mac MacLean was chuckling at me fiddling with my oily hood which summed it all up really but we managed to avoid getting soaked in the downpour behind us as I came back into harbour.

Few more maintenance jobs and a walk to find an inland water ways book called the "Fixed Mast Route" in Dutch.. interesting - I'll have to buy a pipe for a schmoke later.. and hunting for new petrol and an illusive spark plug.. oh! For a Halfords!

Pictures from St B's Kiel Canal trip.. currently weather bound in Cuxhaven after an earlier attempt in what should have been 15 kns of wind but was blowing a little bit more. It's another Low pressure system spinning off near Norway. We're off again in a weather window to try and get as far West as possible before 'The Grim' blows in from the UK. 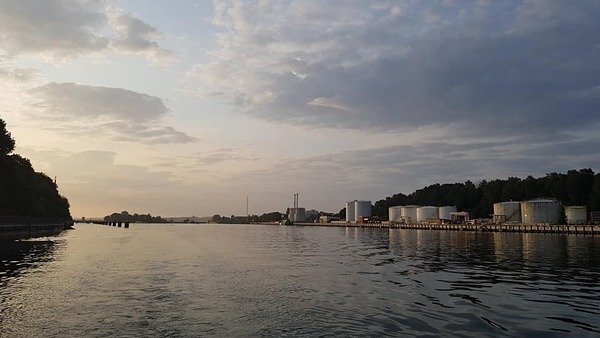 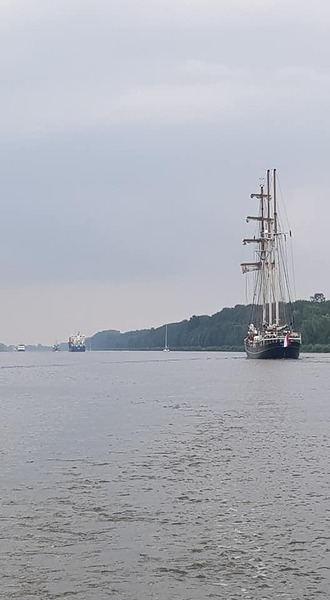 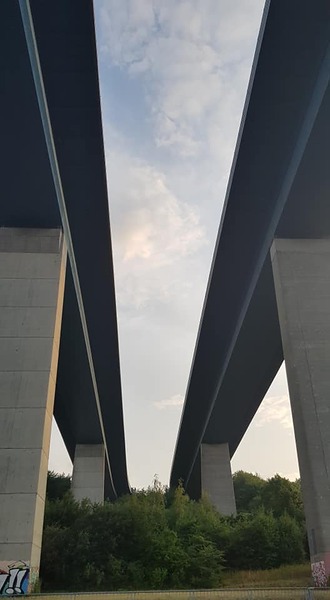 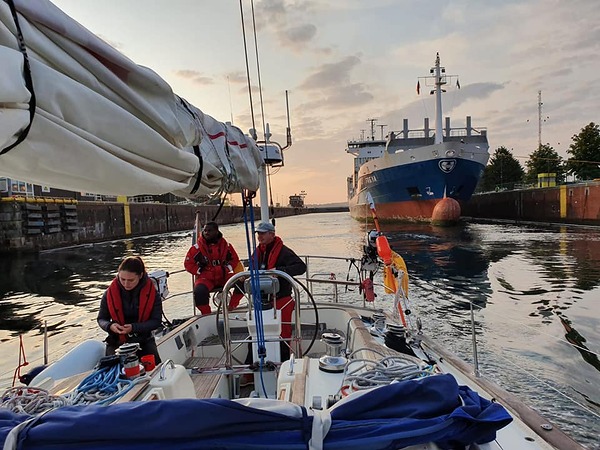 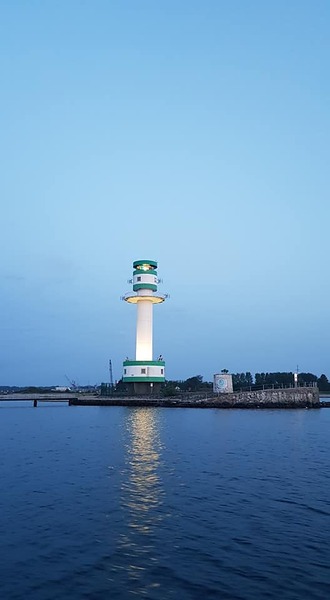 Couple of snaps from today's slap in the face and then some boat maint.. 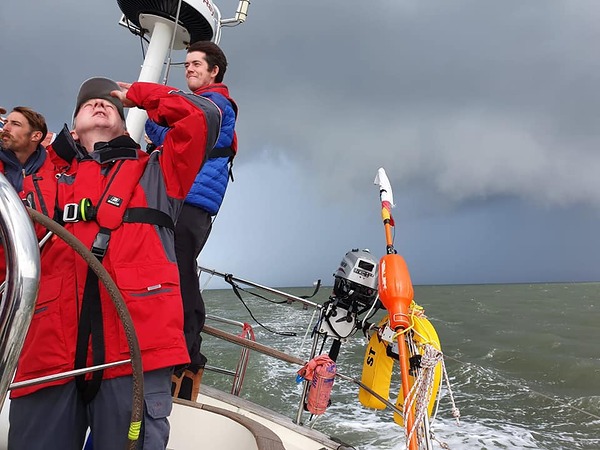 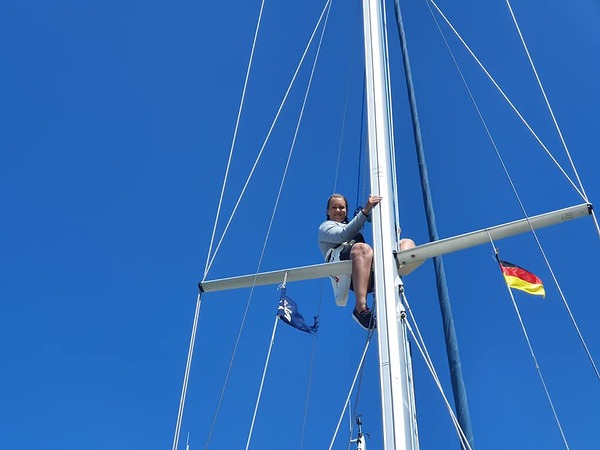 The passage to Middelfart was uneventful less for every turn the wind was on the nose despite most of the forecasts. The marina was fairly small with only a couple of places I could waddle this fat old girl into. I ended up behaving rather poorly and hogged the fuel jetty for the night rather than risk a twilight Pile mooring with a tired Skips and crew.

Less for a nice German couple in the morning - no-one batted an eye and we set off for Sonderborg after another quick run ashore for supplies.. I have learnt that unless its critical - the crew learn best by making mistakes.

However, I do consider almost being bereft of moo juice for my morning coffee a plank walking offence, so a couple of bodies had to go re-stock our meagre hold of supplies.

You may have seen the social media posts made on both coming into and the pleasant passage South not only to 'Sonders' but also the day after (today) passage into Kiel. It is expected I suppose that once the BKYC fleet came back (I was on that trip too) the effect on the locals would've been felt - around 10 boats per week, every week, heading to the Danish islands has certainly affected one of my old haunts! A seasoned barmans' eyes lit up when I asked about what had happened to "Maybe Not Bob's" - and then perhaps a tear as we reminisced about ladies dancing on tables and Viking beer being quaffed. Days now gone..

So, St B got a leg stretch today on a great reach into a downwind leg and the funny smell returned. I made Laboe on purpose as I both know it well and guessed there would be room for the boat. Also 47 Regt has a budding Naval historian in young Charlie Guppy who had been telling us of his interest so I'd changed my plan of the Stickhorn Marina to enable the guys to go visit the U Boat and the Naval Memorial and Museum. Whilst they did this - St B got a good seeing to by me again finding any standing black, grey, sea or fresh water and attempted to rid the forepeak of a stinky smell.

Another early start in the morning as I'm an extra half hr further away from the Canal entrance and that's a mandatory daylight passage through.

Aarhus was nice although a bit less smelly than I remembered - although I'm glad the mildly unpleasant smell of corn is behind me. Roger had followed the berthing plan I had bothered Sail Training International for as I wanted to duck the parade of sail to get underway and make some progress South.

That plan was unachievable due to late and delayed flights and also to much needed crew training.

The handover went well enough and things have been fixed that may have prevented me from leaving this morning in a shipshape fashion. The guys and gals all seem keen to learn and they've done well to listen to my crap jokes trying to inject less doom and gloom into the mandatory safety stuff. There was the usual trepidation that someone was going to actually get wet on the practical Man Overboard Drill!

We have been motor sailing most of the day from slipping at 0900hrs on full main although I deployed as much sail as I could leaving Aarhus on the magnificent parade of sail. I'm heading for Middelfart on the island of Fyn (pronounced Fune) as I know it has a guaranteed fuel point - I was short 142 litres on Handover - no fault to 19 Regt - was due to bad comms between STI and Aarhus events and Aarhus Port Ops.. minimum delivery was 200 litres.

Rest assured fellow TS19 skippers - things were said about quite a lot of 'snags' in the TS Captains washup (all 2 hours of it!).

Having fully recovered from our first night out we were all eager to set sail on what, for the most, was our first ever voyage.We started to prepare the boat at 0800 and slipped at 0900 with the initial part of the journey being "Parade De Sail", where many locals had come to watch the wide variety of tall ships leave the harbour town of Aarhus.

We sailed for around 9 hours and covered a good distance, arriving into Middelfart early evening. We worked as one complete crew so managed to get a lot of hands on experience which was also bolstered by our skippers regular lessons / top tips sessions. However, what surprised us the most was how exhausted we felt after only one day at sea. Also a regular dose of coffee kept us functioning whilst at sea but as soon as we were docked it was not long before we were all fast asleep on our trusty boat St Barbara.

We started the day nice and early as we had a lot the learn about sailing before we casted off the next day. Sgt Ford, who was worried about being sea sick, had his concerns come true. Waking up on a rocking boat had him running up deck to flavour the water. All this and we still haven't left port.

After breakfast and a shower we got a full day of 'learning the ropes' from our seasoned skipper WO1 Russ Webster. We also went and did a large food shop to supply the boat for the journey ahead.

The evening was spent in a relaxed manner with refreshments, fireworks and a boat horn blowing competition before heading to bed ready to set sail early the next morning.

The day started off with us meeting at 0600 all packed and ready to cast off, LBdr Guppy was in the drivers seat making sure we got to Stanstead airport safely for our flight to Aarhus Denmark. As with any plan there has to be a little hickup and ours was that we were unable to find a drop off point at the airport for our hire vehicle. After a few phone calls we established that the hire company we rented the vehicle from does not have a drop off at Stanstead and the nearest drop off point was an hour and a half away, this was of course not possible because our flight was due to leave in two hours.

Luckily Bdr Shackcloth managed to arrange for the hire company to collect the vehicle at Stanstead where we - after some more negotiating- arranged to leave it at one of the local hire companies.

We were all set and ready to depart. On arrival at the check in desk Bdr Shackcloth handed us our boarding paper passes, apart from Capt May and Sgt Ford who received an A3 laminated copy of their boarding passes. We all stood back sniggering as they walked forward and present these massive pieces of paper to the check in clerk.

The rest of our journey went without a hitch and we met WO1 Russ Webster at Aarhus docks where he led us to St Barbara V; our home for the next few weeks. we had a long day and everyone was keen to get their heads down after the mandatory safety briefs.