After much deliberation, planning, and multiple last minute adjustments we managed did it and managed to pull off an event on our 71st year! Despite Yarmouth Harbour being near capacity with two other rallies we were suitably accommodated and the eight yachts competing this year enjoyed excellent company from cockpit to cockpit. RSYC were once again outstanding hosts and we are grateful for their continued support and loyalty to the RAYC: the crew aboard the committee boat set three excellent courses, with tough, variable conditions in light airs in the morning and strong tides. The wind filled-in suitably for two excellent races in the afternoon.

This year's social looked slightly different with small-group prize-giving taking place over Zoom in the Club and then beamed-out to crews in the harbour. Food, to its excellent usual standard from RSYC, was packaged in takeaway cartons to provide a veritable feast to those eating aboard their vessels.

Some stellar performances on the water and memorable moments as ever. Saturday sailing got off to a cracking start with the Admiral aboard Bombardier III nudging the Commodore in St Barbara V, causing the latter to then accidentally set the Jon Buoy off in Yarmouth Harbour. Helpful, as the novice crew had been wanting to see what one looked like during earlier MoB discussion, but once recovered not an ideal thing to have stowed below for the weekend.

Prizes were awarded as follows. This year we split the fleet 4/4 into the Bantry and Bhopal Classes to provide competition for all:

Admiral's Cup (Awarded for Best Unit) - YOs' Course 119 (Skippered by Admiral RAYC, with a crew formed from their original YOs' Course in 1986!) 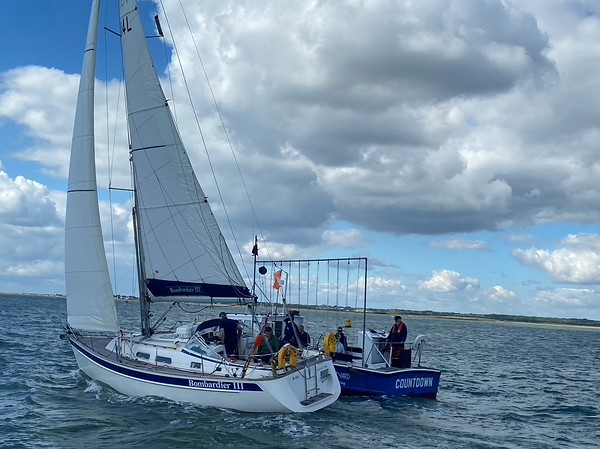