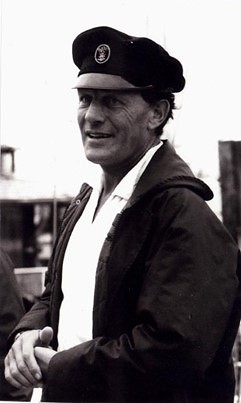 Throughout the early 60s the cry of "Rule Britannia!" could often be heard along the south coast of England and in many of the ports along the French Cotentin Peninsular and around Brittany. Those who knew him would stop what they were doing and scan the horizon for the tall, charismatic young gunner officer, James Myatt, dressed in a well-worn scruffy Henry Lloyd blue waterproof jacket and a salt-crusted Breton cap. Trailing in his wake, having got off any size of yacht would be any number of crew, from all walks of life: boy scouts, girl guides, schools, professions, or the Armed Forces. In the latter case it could be from the youngest recruit to the oldest general all caught up in his infectious love of life and the sea. The cry of "Ho ho! Rule Britannia! How are you Buster?" heralded a drink, a meal, a chat or an exchange of ideas. He was an outstanding ambassador for a generation of young men and women who would go on to be key players in the nascent sail training arena.

His only qualification on entering the Royal Military College Sandhurst as a cadet in the late 50s was "Sea Scout". By the end of his tragically short life he had attained the rank of Lieutenant Colonel, been honoured with the CVO, inspired generations of sailors and been a driving force behind the much-need structure and regulation of sailing qualifications in the fast growing yachting sector.

Major John Hamilton MBE, a veteran sailor now living in Vancouver, served and sailed with James throughout his life. John recalls James' ability to "think outside the box". If a system worked well and efficiently, then good, leave it alone, but was there a better way? If there was, then adopt it and if necessary expand it. He was the opposite of a micro-manager in that he would set a task and expect it to be completed, only being involved if asked to help. On one occasion, the first Trans-Atlantic Tall Ships Race in 1964, John was asked to organise the food for a three-month double trans-Atlantic voyage on the yacht Tawau, at minimum cost. The food arrived in box after box and was stowed away in every nook and cranny; his work went unquestioned and, happily so, as there was neither the possibility nor the need to top up along the way.

At sea, James was one of those people to whom seamanship came naturally. An apprenticeship with 3rd Chalkwell Bay Sea Scouts raised in 1931 and still going strong at Leigh on Sea in Essex, was an inspired starting point; he built on that and was skippering large yachts, some with more than a dozen on board, in his twenties. It was interesting to watch people's reaction to James. He was one of those with whom a friendly, harmonious relationship was established almost instantly. Not only did those he met enjoy his acquaintance but they seldom forgot him, however short the occasion. 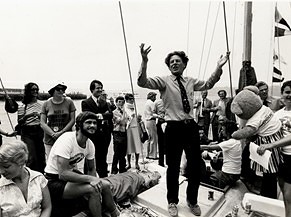 Throughout his adult life, James did a monumental amount to promote adventure sailing, particularly for young people. In the early 1960's he was an official advisor to the Chief Scout and to the Duke of Edinburgh's Award at its inception (the Secretary at the time was Commander David Cobb CVO, RN, Tawau's navigator on the Trans-Atlantic race).

James worked with The Rev Chris Courtauld[1] and Chris Ellis[2] at the start of the Ocean Youth Club (Trust) and he worked very closely with Lord Amory and Commander Walter Scott during the formation and early days of the London (Rona) Sailing Project.

In 1962, James skippered the Royal Artillery Yacht Club's St Barbara for the Tall Ships race from Torbay to Rotterdam, the forerunner for a much bigger expedition in 1964 when Lord Boyd agreed to lend his yacht Tawau for the 1964 international trans-Atlantic Tall Ships race Plymouth Lisbon Bermuda New York Boston Plymouth.

After returning from that long voyage, he and David Cobb threw their weight behind the proposal to build Britain's first "Tall Ship". This was an idea that had grown from the first race in 1956. The two gave a great boost to existing plans and helped to raise enough money to start the building of the schooner Sir Winston Churchill. James was then appointed as the first chairman of a Schooner Management Committee, which organised the manning and running of the ship and, two years later, her sister ship the Malcolm Miller. His infectious enthusiasm not only helped to raise funds for several other sailing schemes all of which came into existence in the 1960's but also laid the foundations for sound, practical management from the start start.

When not supporting landbased sailing organisations, he could be found at sea competing in all the RORC races in the Solent, the Channel, the Bay of Biscay and the Mediterranean. James's seamanship and leadership on these offshore passages was of the highest order; for those lucky enough to take part it was an experience of a lifetime and the greatest fun. Like Nelson, he could get very seasick but a cup of tea with at least four large spoons of sugar kept him cheerful.

One of his little-recognised but immensely influential achievements was the instigation of the Royal Yachting Association Proficiency Scheme[3]. He and David Cobb produced a four level sail training certification system that was published by the RYA. James and Commander Bill Anderson further adapted the system to form the first edition of the present Skipper/Yacht Master Certificate. James became the first chairman of the Yacht Master Qualification Panel, working for the RYA and with observers from what is now the MCA. 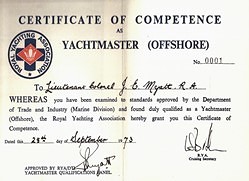 John Hamilton's original response to this long-overdue regulation was "Ridiculous! Yachtsmen examining yachtsmen? - Certificates will be issued with the third gin and tonic." James retort was that they most certainly would not and that John had better come onto the Panel to help ensure that they weren't which he did with penitent enthusiasm!

The Tall Ships races were always one of James's great interests. He skippered an entry in most races between 1960 and 1976 or took a leading role in the onshore organisation. On the leg between Bermuda and New York in 1964, he introduced the very first 'Crew Interchange', by swopping an "officer" and four crewmembers off Tawau with five crew from the Norwegian square-rigger Christian Radich. Exchanges have taken place ever since during the middle leg, usually a cruise in company, of a Tall Ships race series. He was a well respected member of the Royal Ocean Racing Club, proof of which was that he was asked, together with Sir Hugh Forbes and Sir Maurice Laing, to investigate and produce the 74 page official inquiry into the disastrous 1979 Fastnet Race. 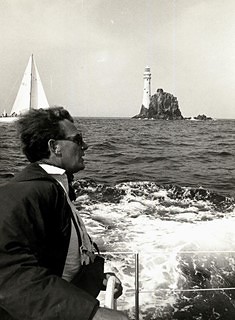 From 1978-1982 he was Chief Executive to the Royal Bath and West Show. During the short time he was there he expanded its activities and established several new substantial exhibition buildings on the showsite.

It was towards the end of this appointment that he was diagnosed with cancer and despite a fighting rear-guard action eventually succumbed at the age of 51. Commenting at the time, John said that it was a tragedy that someone who had so much to give should be taken at the relatively young age of 51. To which someone replied: "Well, if you realise that he packed twice as much into his life as most other people, he's actually 102."

In the aftermath of his death, Fiona his wife, together with John Hamilton, Colonel Trevor Jones OBE and Brigadier Robin Duschene, all senior members of the RAYC, set up the James Myatt Trust Fund under the patronage of James's close friend HRH Prince Michael of Kent GCVO, KStJ, CD. Thirty-three years on, this Trust still sends between twenty and thirty young boys and girls between the age of sixteen and twenty-five from disadvantaged backgrounds to sea each year on one of the thirty or so yachts linked to the Association of Sail Training Organisations.

James' sister, Baroness Platt of Writtle CBE, DL, FRSA, an original Patron of the Trust died in early 2015 and the Trust welcomed with great pleasure the current Admiral of the RAYC, General the Lord Richards of Herstmonceux GCB, CBE, DSO, DL. Lieutenant Colonel Nigel Lang also a Gunner and a very experienced offshore sailor was recently recruited as a trustee. Both were amongst the '60s generation to be inspired by James and learnt much of their sailing on St Barbara and Barbette before buying their own yachts.

The latest trustee, Robbie Crow, was a recipient of JMT funding in 2012 and has stayed involved with sail training ever since. He is a trustee for GCIL in Glasgow and chairman of the national children's charity MACs. Together with the other trustees, they feel that what they are doing goes a little way to repay James for their life-long love of the sea.

If any one reading this who has sailed with James in the past or is moved enough knowing now just how much he has done for today's sailors, then please do support the Trust in the knowledge that it will change some young person' life for the better. Thank you.

[1] Whose yacht Duet, a 50' yawl, is the longest-serving training vessel in Britain and is operated by the Cirdan Sailing Trust.

[2] Who left a fund for the Ocean Youth Trust South to help impoverished young sailors.

[3] Taken from the RYA website: "The sheer number of people we have trained, and the commercial success they have found all over the world confirms the value of the training the RYA provides. Over 11,000 professionals working on commercial vessels across the world have RYA Certificates of Competence"