The Marine Accident Investigation Branch (MAIB) Report on Report on the investigation of the keel failure and capsize of the Comar Comet 45 Sport yacht Tyger of London 1 nautical mile south of Punta Rasca, Tenerife on 7 December 2017 was published in October 2019.

A copy of the Report is attached 2019-13-TygerOfLondon.pdf.

The skipper, RAYC Commodore, Colonel Neil Wilson, and crew of St Barbara V which was 200m to the west of Tyger of London at the time of the capsize, raised the alarm and rescued the crew from the water. Once landed in Tenerife, they were treated by Spanish emergency services before being released. There were no serious injuries.

The Report on the investigation, technical and historical context (including two similar accidents), conclusions, recommendations and crucial action taken is attached.

A synopsis of the report from the perspective of St Barbara V is below including context from the Gunner Sailing blog is below.

Purpose of the Synopsis

The purpose of this synopsis is to highlight the exemplary nature of the rescue by St Barbara V so that lessons may be drawn about the manner in which the rescue was conducted for RAYC training and leadership.

On the 7th December 2017, both St Barbara and Tyger of London were sailing towards Tenerife in company.The skipper's comments on St Barbara V blog on that day were as follows (not part of the Report):

Quite a day! Setting out from La Gomera at 0830 as planned, we beat all day into the teeth of an Easterly Force 5, rising to a continuous 6 gusting 7. We set sail with 1 reef in the main, the No1 Yankee and staysail, and made heavy going of the crossing to the southern end Tenerife, fighting an adverse current all day resulting in a tacking angle of 120-130 degrees. There were times when we felt as if we were going backwards, but with sightings of a turtle, a pod of pilot whales, and bright sunny conditions moral was maintained. It rose as the town of Les Galletas came into sight as we rounded Punta Rasca, 5 miles out. We did so in the company of another yacht also being beaten by the wind, Tyger of London a Comet 45S.

Thursday, 7th December. Tyger Report. We were sailing in close proximity around Punta Rasca for about 30 mins when the wind began to rise to F6+ and we put the second reef in the Main. Tyger

followed suit 10 minutes later and as she came back onto the wind she broached and lost her keel. Her mast hit the water and she capsized, turning turtle within 30 seconds. We sent an immediate MAYDAY call, dropped our headsails, started the engine and turned around to assist. The off-watch

were rapidly brought on deck as we approached the 5 crew members (4 male, one female, German-Swiss) of the stricken yacht, one of whom had who had been trapped beneath it by her harness. Her partner dived beneath to release her as the remainder drifted clear. They had floated about 200m downwind of their yacht which allowed us to pick up the first 3 in our first pass using St Barbara's throwing line and a fender on a warp as recovery lines. Having got them alongside we took them on board via the stern ladder and then went back for the other 2. All 5 were wearing inflated life-jackets which made them easy to see despite the high winds and rising sea. We got the same recovery lines to the last 2 casualties and brought them on board in a similar fashion. Less then 30 minutes from sending the MAYDAY message we had recovered all 5 casualties and had taken them down below to assess them and provide first aid/warmth. We then motored directly into the F7 for the last

4 nm to the nearest harbour of Les Galletas and transferred the casualties ashore. They were all very shaken and the female, in particular, was suffering from shock, but the harbour authorities took good care of them and we bade them farewell. They were most grateful.

At about 1600, Tyger of London's skipper and crew sighted St Barbara V, approximately 1 mile ahead. As the wind had reduced to force 6 they decided to remove the second reef from the main sail to pass St Barbara V.

As Tyger of London cleared Punta Rasca, the wind backed to the east and increased to force 7. The skipper decided to reduce sail and gave the order to put a second reef into the main sail. Once complete, the crew returned to the cockpit and remained clipped on with their safety harnesses. The track of Tyger on that day is shown in the following diagram: 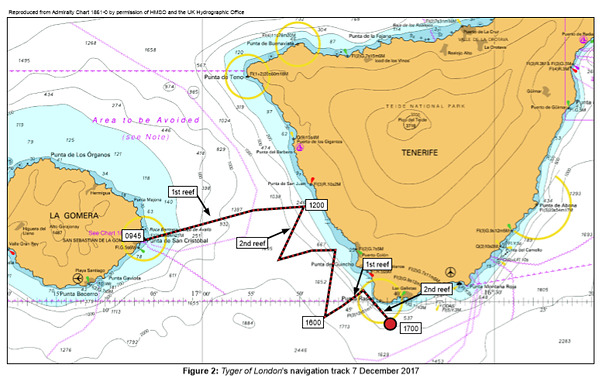 The helmsman then altered course to starboard to fill the sails. Tyger of London was approximately 200m to the east of St Barbara V. A few minutes later, at approximately 1700, the crew heard a loud bang. The skipper thought that one of the shrouds had parted; another member of the crew thought that a heavy object had fallen over in the cabin. Tyger of London heeled rapidly to starboard, its mast and sails hit the water and then, after a brief pause, the yacht inverted.

As the vessel heeled over, the crew fell from the cockpit. Some of the crew struggled to unclip their lifelines. However, they had all managed to release themselves and, as they entered the water, their lifejackets inflated automatically. Four of the five crew members quickly swam clear of the upturned yacht. One was trapped by the netted guardrails (Figure 3), but after 30-40 seconds managed to swim clear.

The skipper of St Barbara V, 200m to the west, saw Tyger of London capsize. He immediately instructed his crew to start the engine and drop the genoa while he made a "Mayday" call on VHF radio.

As St Barbara V passed the upturned hull, he called to those in the water and established there had been five personnel on board. St Barbara V's crew then quickly counted the fluorescent lifejackets and confirmed that they had all five in sight. St Barbara V's crew then prepared to recover the personnel from the water. The skipper manoeuvred the yacht (Figure 5) while the crew rigged the boarding ladder on the transom to allow the casualties to climb on board. They also streamed a buoyant rubber fender on the end of a mooring line behind the yacht to act as a hand-hold for those in the water waiting their turn to climb the ladder. The following diagram shows the manoeuvre of St Barbara V around the upturned hull of Tyger 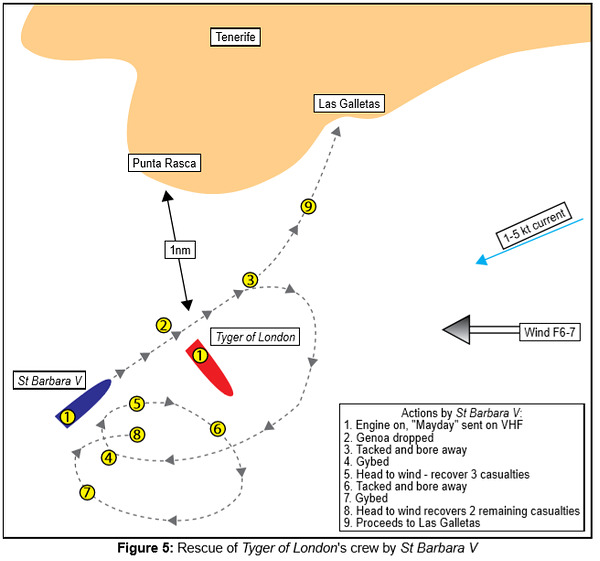 First-aid was administered in the yacht's cabin, where the rescued crew were provided with dry clothing and a warm drink. Tyger of London's crew were shaken but unhurt. All five required assistance from St Barbara V's crew to climb the boarding ladder. One of those rescued was found to be wearing their lifejacket under their outer clothing.

The Report conclusions specifically identified that "The swift response of the skipper and crew of St Barbara V ensured Tyger of London's crew were rescued unharmed. [2.7.4]".

The investigation also found that the crew of Tyger of London were well prepared for emergency situations such as capsize; they were wearing lifejackets and the yacht was equipped with a liferaft and electronic position indicating radio beacon (EPIRB). However, the EPIRB and liferaft were not rigged to float-free and the crew did not have time to release and operate them before the yacht capsized.

Other conclusions and recommendations are contained in the Report.

The MAIB has issued a safety bulletin advising owners of yachts fitted with similar keels, of the potential risks of this design, specifically: to note, due to its design, the condition and tightness of the keel bolts do not indicate the true condition of the keel; to arrange for an out of water inspection by a suitably qualified surveyor.

A number of actions have been taken by the Maritime and Coastguard Agency and British Marine in response to this report, to improve guidance on keel inspection and the stowage of lifesaving appliances. A recommendation has been made to British Marine to propose changes to the International Standards Organisation, to require, rather than recommend, that manufacturers provide guidance on the inspection and maintenance of keels fitted to their craft. 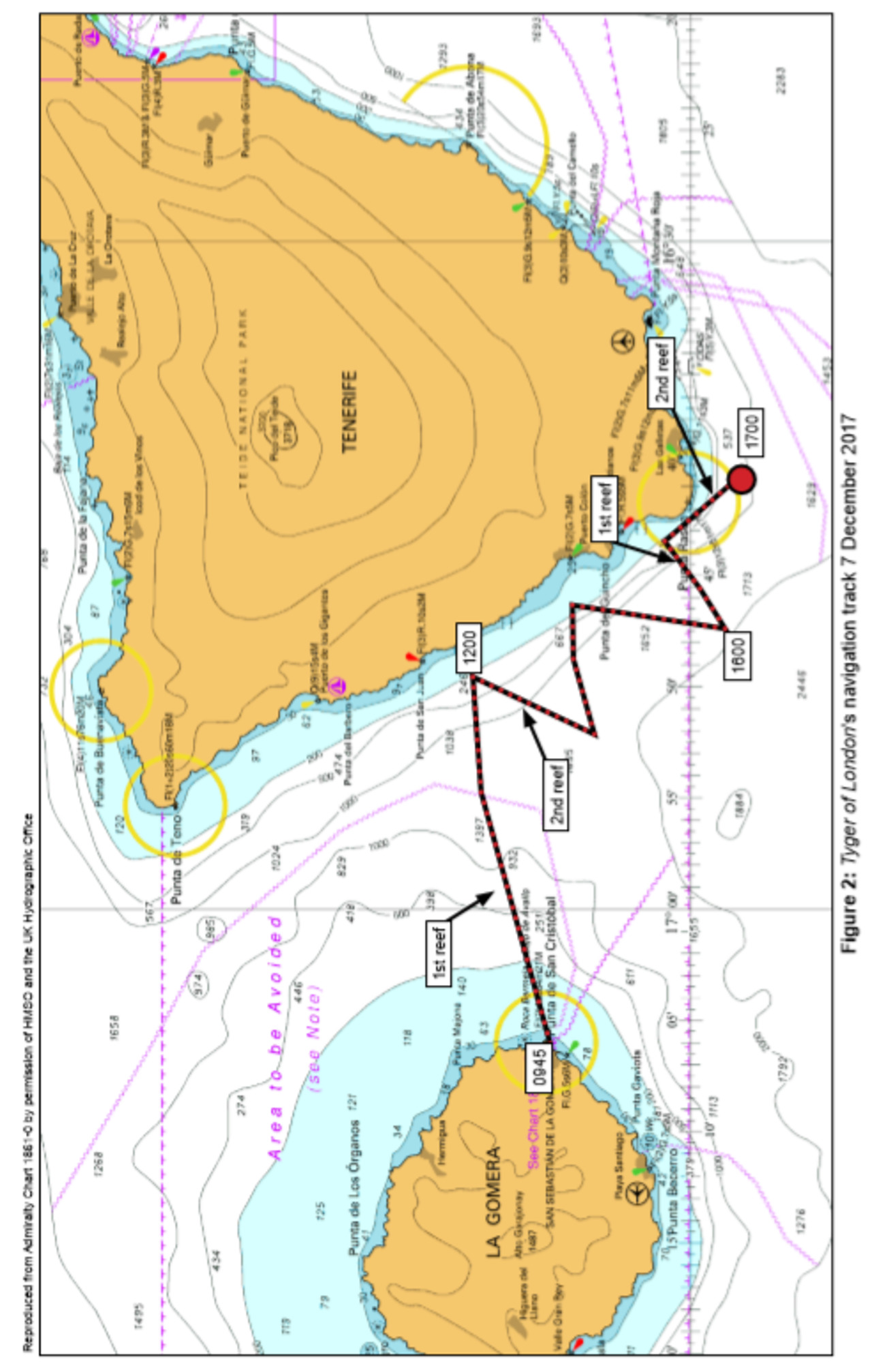